Related Pages
News & Events
All individuals who have completed their First Holy Communion and are of good faith are welcome and encouraged to join the Altar Server Ministry. Parents with children interested in becoming an altar server should contact John Nelson for information and to schedule training. We provide training on an annual basis. Please see the Altar Server Training Manual link on the left for information on training and altar server scheduling.

The goals of the All Saints Altar Server program are as follows:

New servers application form: Individuals interested in becoming an altar server are required to complete an application to enroll into the program.

Orientation, training, and assessment process: A new Altar Server Training Manual has been developed and is now available on line. New servers are required to complete this manual as well as a parent guided self-study module, and hands on training session prior to serving.

Annual promotion opportunities and Commissioning Mass: Depending on their age and grade level, servers may be considered for promotion each year. If eligible, promotion candidates must complete additional training and self-study modules pertaining to the rank they are trying to achieve. They will also be observed serving a mass to determine their competency for the next level. Promotions will be granted during a Commissioning Mass – held annually in November.

Server recognition activities: Servers will be recognized in a number of ways throughout the year, (e.g. Photos will be placed in the vestibule quarterly; names will be announced at the beginning of mass, various social activities).

Scheduling process using Sign-up Genius: Servers will be assigned to teams of 3 and scheduled (on a rotating basis) to serve at all (non-holiday) weekend masses. A maximum of 6 servers will be permitted to serve at any given mass. Additional servers will sit in the first pew to the left of the altar.

Mass coach: Each weekend Mass is assigned an Altar Server team, each team also has an assigned Mass Coach. This adult individual is there to support and offer feedback to the servers as they perform their server duties. Mass Coaches MUST complete the VIRTUS safe environment training and submit to a background check (good for 5 years) as mandated by the Archdiocese of Atlanta.

If you have any questions regarding the program, please contact John Nelson.

On November 13th the Altar Server Ministry promoted 9 altar servers and recognized them for their hard work and service to All Saints Parish. Three other servers will have their promotions recognized in the coming weeks. In addition to altar servers not up for promotion this year, we currently have 4 new servers in training and are always looking for more. Come join us! 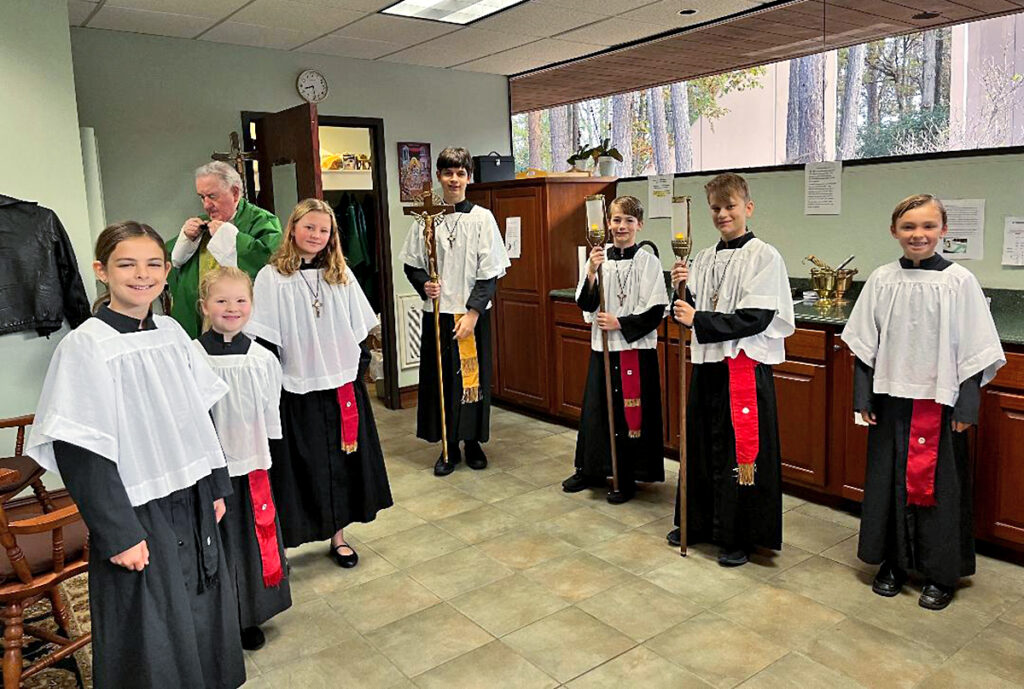 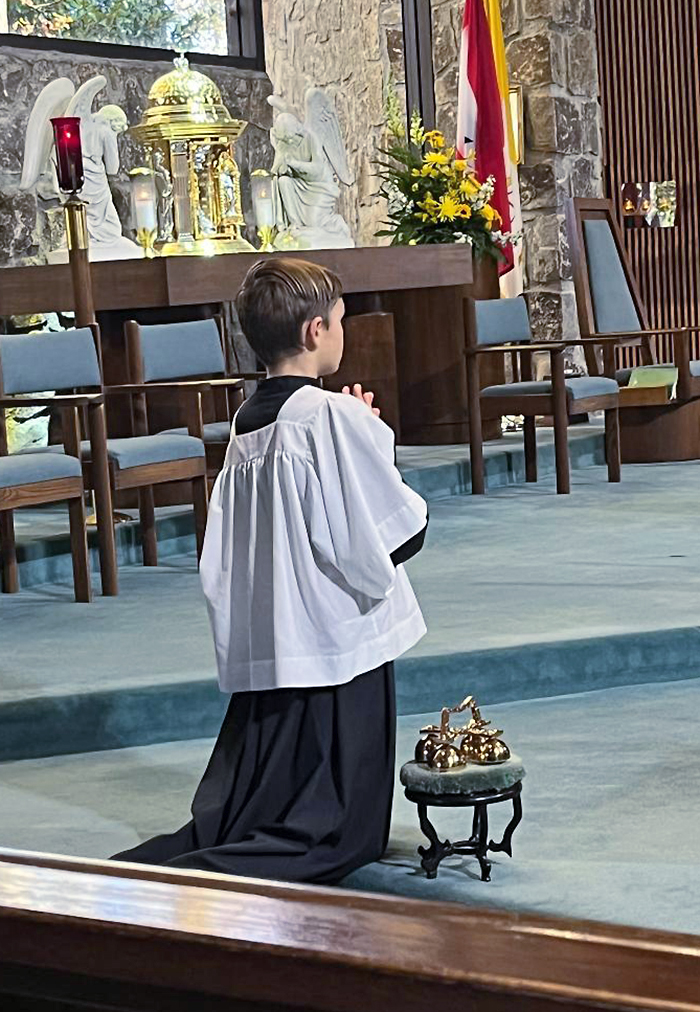 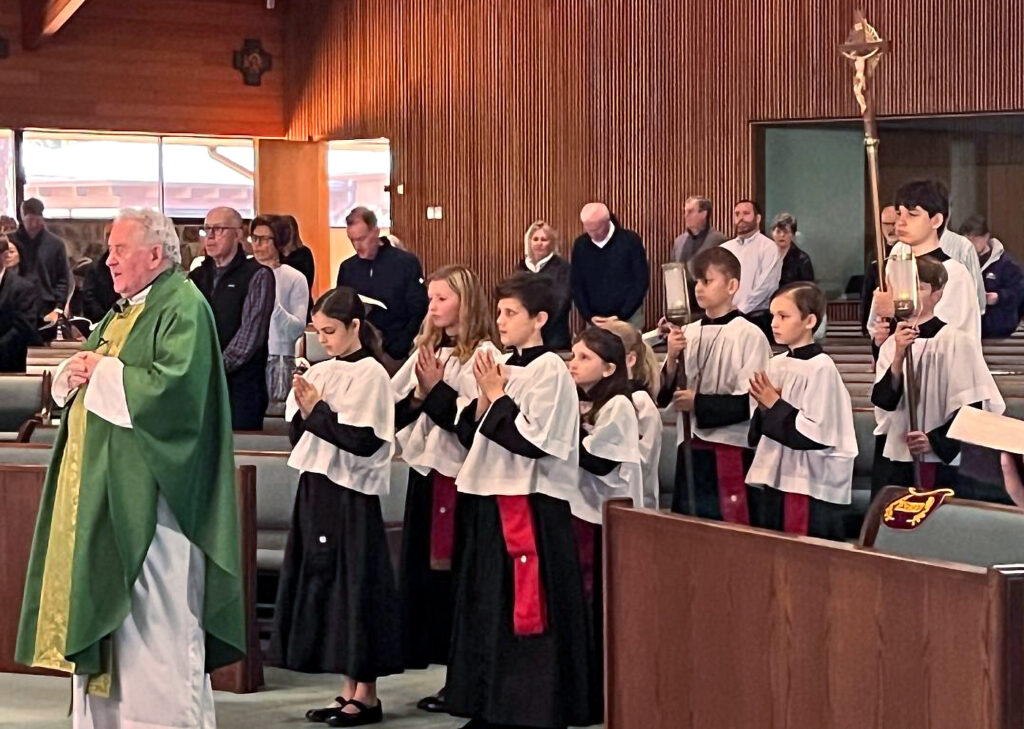 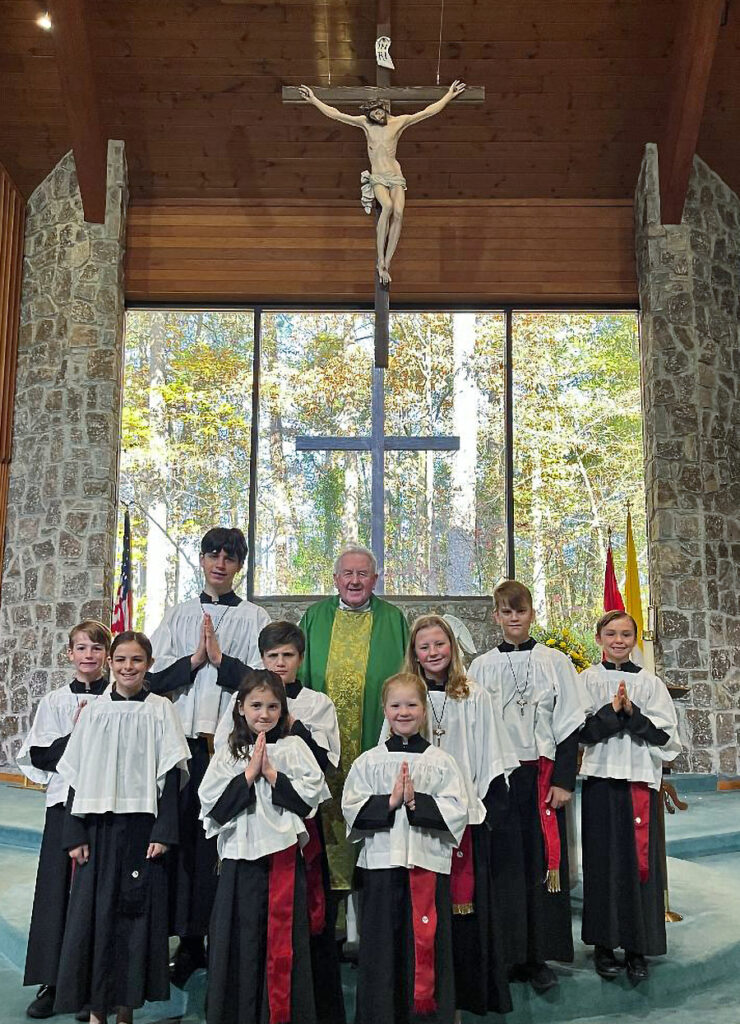 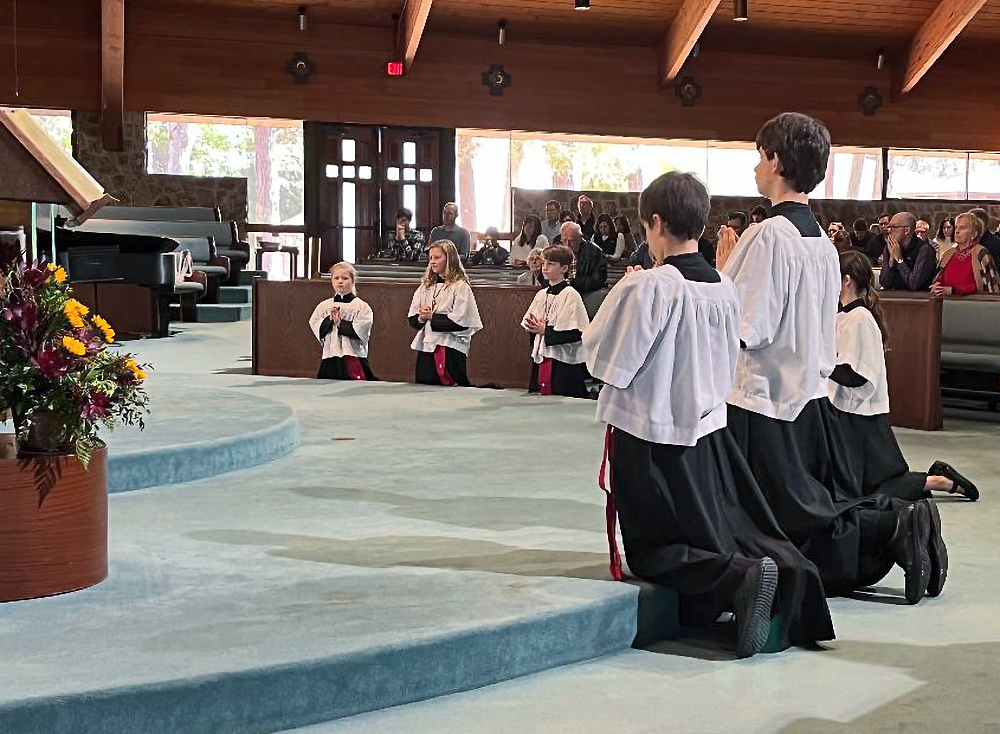 The Altar Server Ministry here at All Saints is always on the lookout for an opportunity to keep the kids engaged in service to their parish and their community. Especially now that they have not been able to perform their altar service during the pandemic. The servers recently participated in the Picnic Table Project through the City of Dunwoody Economic Development Department. The program engages volunteer groups throughout the city to paint designs on picnic tables that have been placed outside various restaurants to aid in social distancing efforts.

Servers of all ages submitted designs and then cast their vote. The winning design was submitted by Andrew Lyons. Several servers came on consecutive Sundays to complete the Sun/Moon/Stars themed table located at Crema. Stop by and enjoy our table if you can! 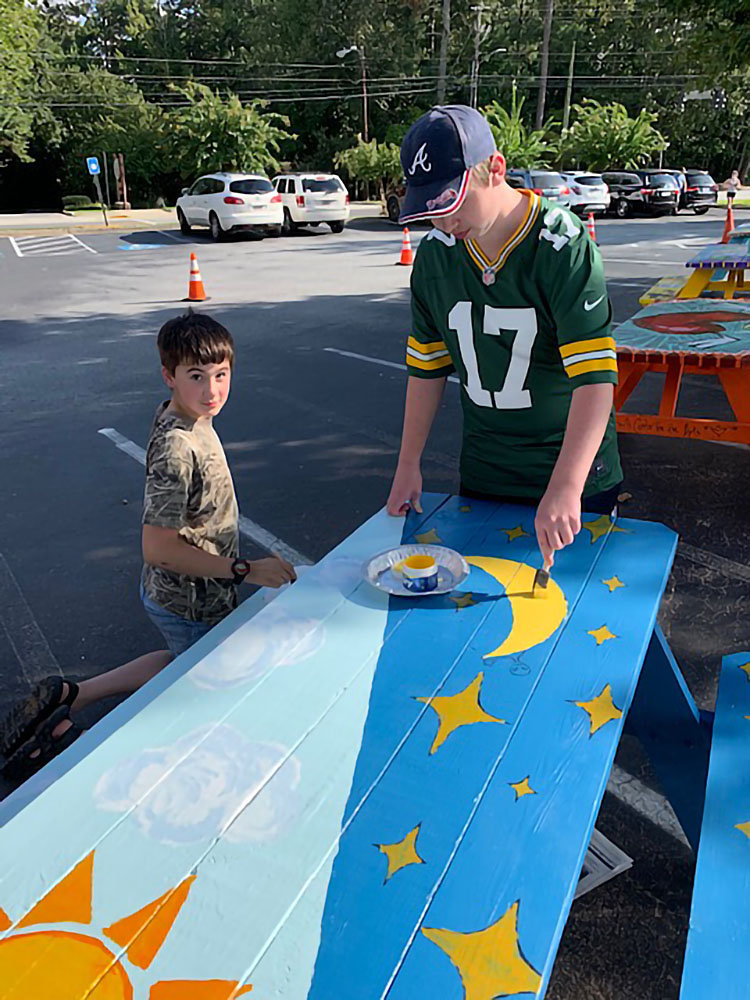 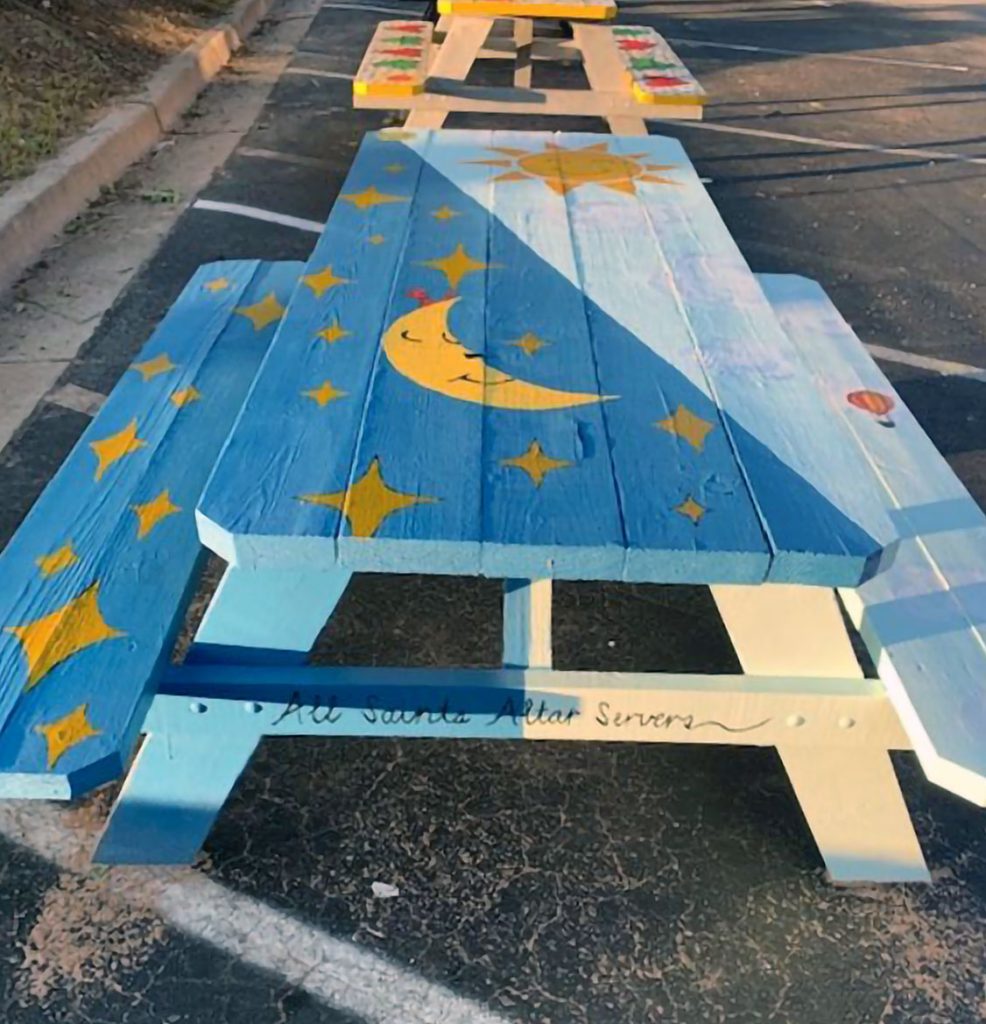 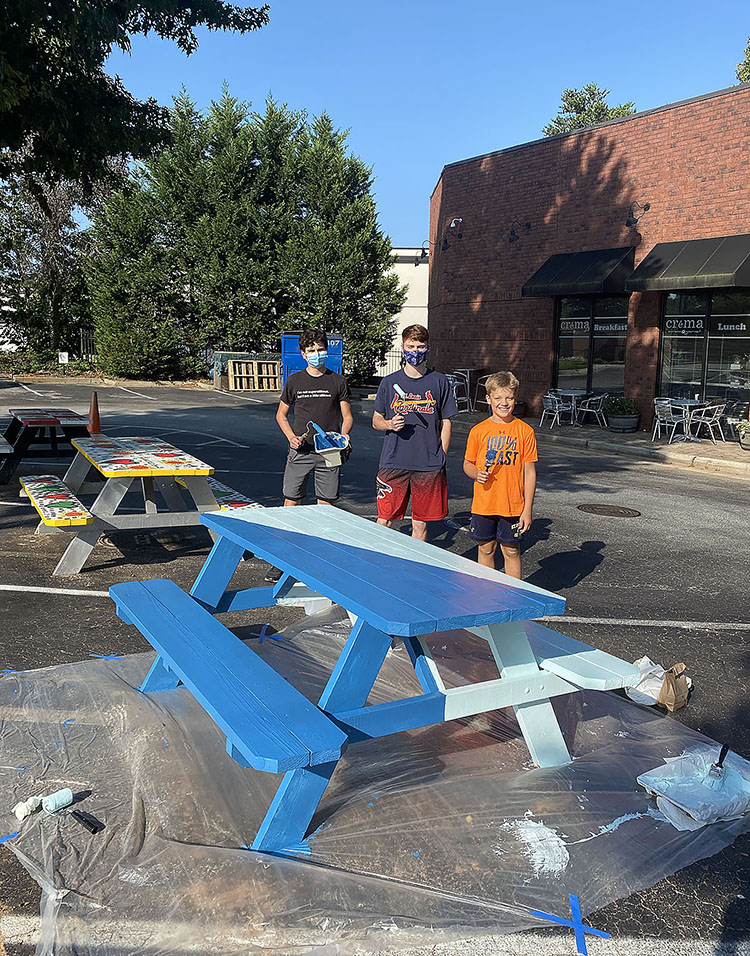